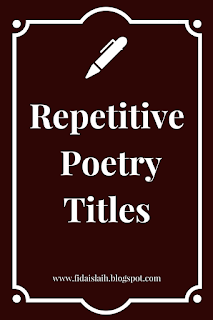 The title is almost as important as the poem itself. Not all my poems include the title within the poem. And that's okay. I believe that sometimes the title of the poem should be within the poem. Together, it connects the two. It gives the reader an AHA moment. It shouldn't be put in there just for the fun of it. It has to add something to the poem. The title has to relate to or deepen the poem in some way or it will just seem repetitive.

Speaking of repetitive, some of our original poems have the same title. If it's my own poems it's frustrating if they share the same title because then I don't know which one is which poem. If your poem does have the same title as someone else's poem there's nothing wrong with that. As you initially write the poem it's alright to leave it without a title or call it 'untitled' but do remember to add a title soon, so that you can distinguish between the poems. Also, you will know that the poem is completed.

"If someone's poem has the same title as mine, I can't really help it. There are only so many words to use. I wouldn't want to use a name of someone else's poem for my poem if I knew of it; I would think up my own instead." @FebruaryGrace.

Make your own titles with the poetry title guide.

Comment: How do you feel about several of your own or someone else’s poems with the same title?