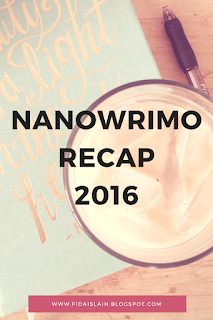 During the month of November, I attempted at NaNoWriMo. I took a different approach. Instead of writing a fiction novel I decided on a non-fiction project. This project will be a nonfiction story of my journey as a writer. It is something that has been bugging me to be heard and I'm finally listening. It's what I've been leaning towards. Since I thought of it in the beginning of the year I keep getting new ideas for it. I got the final push I needed from #NaNoLounge.

From the beginning, I was already having an endless amount of spelling errors. I was a bit excited about finally working on this story idea. Another thing I kept doing as I write was ending it with referring to read more in a later chapter. For the first week and beginning of NaNo I wrote for 10 consecutive days.

After that, I felt the slump and unintentionally stalled the project. I didn't think about it, I almost forgot about it. I picked it back up on the 22nd and wrote for a couple more days. The word count that I needed to catch up on was overwhelming that I stopped again. A couple days after that I told myself I need to try and at least get a few sentences down but a few story ideas were already creeping in.
I'm disappointed that I didn't continue to push myself to work on it. But I'm not mad about not reaching the 50k winning goal. I finally got the project started and that's all that matters. I'm opening myself so much, much more than I do on my blog and social media. Throughout the project, I made some discoveries about myself. I'm surprised and happy about the journey of writing about my journey. Some day it will be a publishable book.