Putting my Beliefs in my Poetry 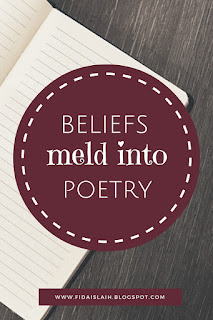 Some authors believe their beliefs in love and life should show through in their writing while others feel that they shouldn't and the beliefs that show up in the story is up to the character.

In fiction stories, whether it's the author's beliefs or the character's beliefs, it is understandable but non-fiction is different. You write of your beliefs and your beliefs should shine through.

I'm picky about the songs I listen to. When I listen to songs, I stop if they are inappropriate. Inappropriate to me is drugs and sex.

Lots of well known songs talk of a lover. It's romantic but some are too sexual for listeners to think of anything else other than that. If the sex is not there and the romanticism is light or not distinct, it won't be inappropriate for readers and listeners.

In some songs of romantic love I am able to think of friendship instead.

I make my poems like that, appropriate for both lovers and friends. I daydream about guys but I want my poems to reflect my beliefs.

What do you think? Should authors share their beliefs?