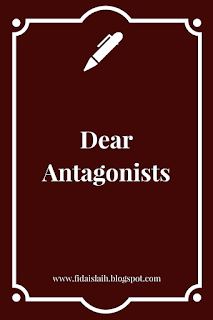 Today is also TCWT's March blog chain. The prompt: “Write a letter to an antagonist.” But I don't know who to write the letter to and what. This will be updated later today when I do. I hope you understand, Thanks! Well, I decided to write to a few antagonists instead of one, I hope you don't mind. Also, I'll warn you, there are some spoilers. If you plan to read 'The House I Loved' don't read paragraph two. Enjoy the letter!

There is some of you I hate and some I'm okay with. I'd like for you to leave. But then how would a story happen without you.

Voldy, I know you hate that nickname. I hate that you had people kill my favorite people. But then what would be the plot of the story? So thank you! I know you're hating yourself right now. I'll leave you alone.

The government in 'The House I Loved', how can you think of destroying a house, a town with so much history. People have grown to it. You're not just breaking buildings, but hearts too. I suggest you stop, but then the story will still find a way to kill the MC. You made her and her friend die together instead of alone. It makes it sweeter. Thank you.

Doof (from Phineas and Ferb) you were the first known villain in my fictional part of life. You weren't that mean. You were more funny, messing things up. I know you hate that. I'll be nice and not remind you anymore. Thank you.

Unknown said…
Oh wow, you covered such an array of villains with this. Definitely plucked at my heartstrings.

And I'm so sorry about having someone you love with cancer. One of my best friends fought that battle and I know it's so very hard. I'll definitely be sending prayers that way. :)
March 11, 2013 at 5:31 PM

Anonymous said…
You're so right, there isn't a story without them. They do get under my skin, though.

Unknown said…
I have seen cancer in my family, so this hit home.

Stopping by to welcome you on board the A to Z Challenge April 2013.
Look forward to your challenge posts!
Please consider putting up the Challenge badge so it is easier to identify your participation.
Twitter: @AprilA2Z
#atozchallenge

Liam, Head Phil said…
What an interesting post! I never even thought of covering multiple antagonists in the same letter. Good post!
March 17, 2013 at 2:45 PM